Rocky has got the same easy going attitude that his sire has got. He is a delight to handle and created no problems with learning to tie up or load onto the truck.

His first foals are now on the ground, 2013.  Out of his 5 progeny, 4 are black stunning leopards – 3 colts and 1 filly. Unfortunately, one of the colts was born with a neurological problem  and he was put down. The 5th foal is a chestnut filly with very little colour, but is showing signs of roaning. 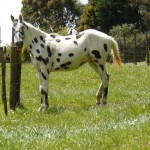 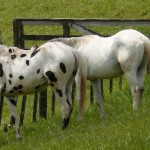 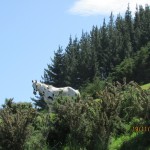 DayDream Ezy Strider
Strider is a B Grade, 2011 black fewspot appaloosa.  His sire is DayDream Major Sioux, see below and his dam is BR Diamond Sparkle, a bay with a large spotted blanket. Sparkle has given us 5 wonderful progeny, 2 leopards, 2 fewspots and 1 bay with a white blanket. Sparkle’s 2 leopard progeny have gone to the same grateful lady, Carolynn, whom loved her first foal and came back for a second. Carolynn is blown away by there wonderful easy going natures.
Strider now, has 6 progeny. All are coloured and are a real credit to him. The bay leopard colt is so inquisitive and bowls up to any one in his paddock to check you out.   See them in the Foals.
I found having 2 stallions a struggle and after much consideration made the decision to geld Strider. I have some wonderful fillies from him and am keen to see how the mature.
Shaz has now taken Strider on and changed him into a wonderful riding horse. 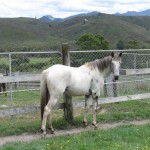 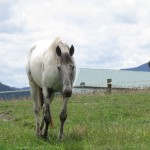 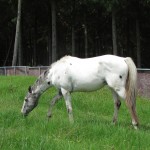 Major is a C Grade, 2005 chestnut with a small blanket, appaloosa stallion. His dam is Miss Tutukau, a chestnut fewspot mare who was 16hh, sadly deceased now. His sire is P&R Colidas Hopeful Lad who is a 16hh chestnut roan with a spotted blanket, also deceased now. Major has lovely extended paces and a laid back nature, which has helped with getting him started under saddle.

Major had a bad accident and damaged his jaw and teeth. At one point we thought that we might have to put him down, but he has come through. However due to this he has had quite a check in his growth.

Major is now being introduced to dressage and showjumping and is showing promise in both these disciplines.  He has a very smooth canter and is very calm when going around the jumps.  We are very fortunate to have Janet and Graham whom are putting the time into him.

Major now has 4 foals on the ground and they have very calm temperaments.  There are photos of them in the foal section. 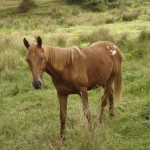 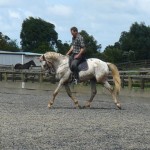 Casper is a B Grade, 2004 black few spot appaloosa stallion.
He is out of KB Carisma by Plaudits Silver Warrior.  KB Carisma has given us 4 foals now and they are all nicely put together. People look at her foals and remark on them. Casper’s pedigree goes back to Deck Bar, Dusti Breeze and Plaudit Silver Fox. All sires that gave some fantastic appaloosa progeny.

Casper had a very laid back attitude. He has done really well and helped to throw some stunning  coloured progeny with great natures. See his foals in the Foals section.
His cruisey nature has shone through when he was being backed. After only a short time he was taken out on a trek, in the company of other horses and he loved it. He caused no trouble and was a breeze to ride. Then over the winter he was left and taken out again. The gear was put on him and he was soo cool about it all. Casper behaved impeccably and was a dream to ride. He was ridden through boggy mud, down step forestry country  and over some trees. Not once did he falter with it all. Everyone was really impressed with how
he went.
Height…15hh 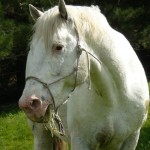 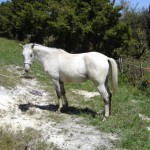 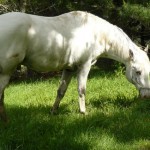 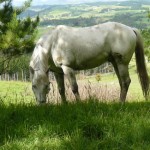 Suntah stands at 15hh and has a laid back nature. We are very pleased with the type of foal that he is leaving. See foal photos in the Foals section. 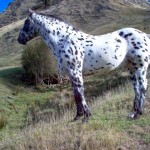 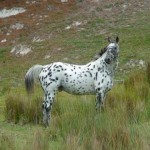 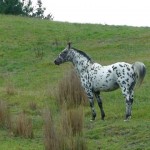 Rocky is a C Grade, 2003 smokey black leopard appaloosa stallion. He carries one copy of the cream gene. Rocky has some great sires in his bloodline –  his grandsire is P&R Dusti Snowprint and  his great grandsire is  Dusti Breeze. He also has Shalimars Pronto Lad, going back to Nevada Devil Dancer and then onto the Ghost Wind line. All great spotted appaloosa horses.

Rocky has now got three crops of foals on the ground with some great colour resulting from these matings. It will be interesting to see how they develop as time goes on. Photos are on site in the Foals section.

We have now sold Rocky to another dedicated Appaloosa breeder. We have got 3 filly progeny and one colt that we are keeping from him. We wish him well in his new home with a lovely new band of mares.

Sadly, he is deceased now.  I hope that he is watching over the progeny that he has left behind, to carry on where he left off, at such an early age.      RIP Rocky. 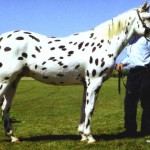 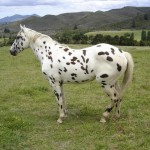 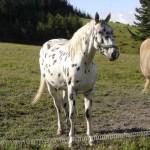 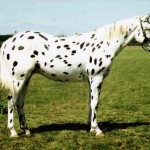 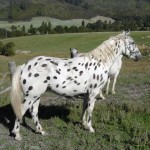